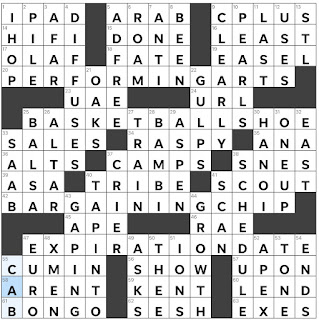 Theme Answers:
PERFORMING ARTS (20A: Theater and dance, for example)
BASKETBALL SHOE (25A: Bit of footwear for Layshia Clarendon)
BARGAINING CHIP (42A: Piece of leverage in a negotiation)
EXPIRATION DATE (47A: Time limit printed on a milk carton)
Theme synopsis: Each theme answer is a TEN-FOUR! in the sense that the first word has TEN letters, and the second word has FOUR letters.
Things I learned:
Random thoughts and interesting things:
Geography review:
This puzzle was enjoyable to solve. Fun cluing such as AREN'T (58A: "Looks ___ everything") and BEEN (8D: "Where have you ___ all my life?") And a nice variety of theme answers. When I finished solving, I had not figured out the theme of the puzzle, so I went back to take another look at those theme answers that seemed to have little in common. I stared at the grid for a long time, trying out various theme possibilities. I finally decided to go ahead and begin my blog post, hoping inspiration would hit. And as I typed up the theme answers... "Oh, that's interesting, all of the theme answers end with a FOUR letter word...Aha! Each theme answer begins with a TEN letter word. TEN-FOUR! I get it!" Tricky, but ultimately satisfying. Interestingly, we saw another puzzle with the title of TEN FOUR in June, yet with a different theme. This puzzle was a great way to begin my Friday.
Nate Cardin