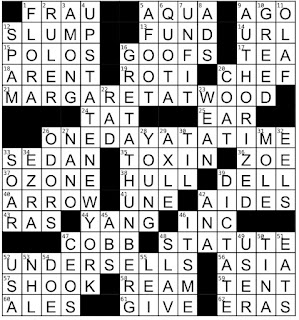 Theme Answers:
MARGARET ATWOOD (21A: Canadian author of speculative fiction such as "The Handmaid's Tale")
ONE DAY AT A TIME (26A: 2017 reboot starring Justina Machado)
UPSTATE NEW YORK (4D: Home to many Haudenosaunee)
GRETA THUNBERG (16D: Fridays for Future activist)
STATUTE (48A: Law)
DICTATE (39D: Employ voice-to-text software)
TAT (24A: Bit of ink)
Theme synopsis: Each theme answer has a bit of INK IN it, in the form of the letters T-A-T.
And now a word from our constructors:
Evan: So, I’d been watching “The Handmaid’s Tale” and wanted to put 21-Across in a puzzle. I noticed this little theme idea could also feature 16-Down, and 26-A… but it just wasn’t all clicking. I invited Brooke to become involved and am pleased with the result. I loved that we had four different divisions of TAT (T/AT, TA/T, T/A/T, TAT).
Once Brooke laid out the skeleton I was able to hammer the rest of the grid into place. This grid was TORTURE to develop. Somehow it worked out—so nicely, in fact, that we could even throw in two extra theme entries at 39-D/48-A. Brooke took the lead on the clues.
Brooke: I hope you enjoy puzzle 2 of n featuring a quadruple intersection among the theme entries! Many thanks to Evan for reaching out to me with this theme idea, and major props to him for filling the grid around my theme set layout (and for inserting two bonus theme entries!). When browsing the internet for cluing inspiration, I found that 21-Across deliberately calls her work "speculative fiction" because it "could really happen."
Black trans lives matter! Please consider supporting orgs such as For the Gworls and the Okra Project if you are able.
Things I learned:
Random thoughts and interesting things:
Geography review:
What a fun puzzle! Did you notice that this puzzle has diagonal symmetry? Most crossword puzzles have 180-degree rotational symmetry, meaning that if you turn the puzzle upside down, the grid looks the same as it does right side up. Some puzzles have left-right mirror symmetry. This puzzle is symmetrical along a diagonal axis. If you folded the puzzle along the diagonal from the top left to bottom right, the black squares would match up. This type of layout allows for the impressive interlock of the four longest theme answers. Super fun bonus to find the mini-revealer of TAT at the intersection of those four long theme answers!
There was a lot to like in this puzzle. The theme answers were interesting; looking back at what I've written I realize that I highlighted all four of the long theme answers. I appreciated the choice to add some bonus theme answers in the lower right of the puzzle, as otherwise this would have been a sizable chunk of the puzzle without any theme. The cluing was informative and inclusive. An extremely enjoyable solve.
Brooke Husic Evan Kalish