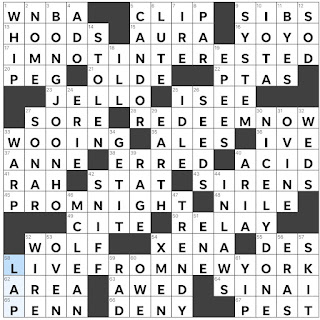 Theme Answers:
I'M NOT INTERESTED (17A: "Count me out!"
REDEEM NOW (28A: Online shopping button)
PROM NIGHT (45A: Occasion to rent a tux)
LIVE FROM NEW YORK (58A: "SNL" intro phrase)
Theme synopsis: The state abbreviation for MINNESOTA spans two of the words in each theme answer.
Things I learned:
Random thoughts and interesting things:
Geography review:
MINNESOTA UNITED FC is a professional soccer club based in Saint Paul, Minnesota. Today it is also the theme of our puzzle, illustrated by MN uniting two words in each theme answer. LIVE FROM NEW YORK was my favorite theme answer today. I also enjoyed I'M NOT INTERESTED, which sounds more polite than the emphatic "Count me out!" It took me a bit to uncover REDEEM NOW, as I wanted it to be "buy now" or "go to your cart" (which is obviously far too long...) This puzzle was NICELY DONE, and an enjoyable way to begin my Wednesday.
Zhouqin Burnikel