Title: ARE YOU MY MOTHER? 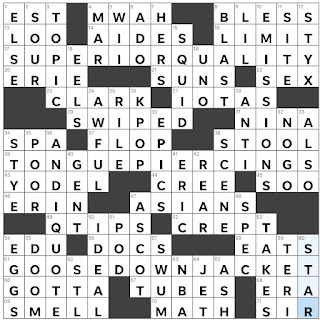 Theme Answers:
SUPERIOR QUALITY (17A: Extremely high-grade)
TONGUE PIERCINGS (39A: Some studs)
GOOSE DOWN JACKET (61A: Warm layer for cold weather)
Theme synopsis: The word MOTHER can be placed before the first word of each theme answer to produce a common phrase: MOTHER SUPERIOR, MOTHER TONGUE, and MOTHER GOOSE.
And now a word from our constructors:
Brooke: I can't believe this is Rebecca and my collab debut! I talk to Rebecca about puzzles all the time and super admire both her dazzling gridwork and hilarious cluing voice. So, unsurprisingly, I love this grid and our clues! My favorite parts of the grid are KPOP and MWAH and STYX/SEX and my favorite clues are about Carmen SOO, 2x HSM-adjacent (SOUR and GOTTA), our new take on ERIC, Fallopian TUBES, and JET. You'll definitely see more from us soon!
Rebecca: Brooke and I have been talking about puzzles so often and for so long, it’s hard to believe this is our first collab! I’m a huge fan of Brooke’s oeuvre - unparalleled themelesses, super clean USAT puzzles, (trigger warning) Lollapuzzoola Puzzle 4 - need I say more?! Naturally, making this puzzle was a lot of fun. Although our inspiration was a 15-letter theme entry that was left on the editing room floor, I love the three spanner theme entries we kept and their clues, as well as some fun fill like SWIPED/SQUID and AND I QUOTE. I hope you enjoy this puzzle - you haven’t seen the last of us!
Things I learned:
Random thoughts and interesting things:
Geography review:
First of all, I adore the title of this puzzle, a reference to the 1960 children's book by P.D. Eastman about a little bird searching for its mother. This summer, my husband and I were 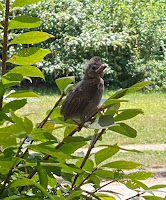 fortunate enough to witness an ARE YOU MY MOTHER? moment. We had a cardinal nest in the burning bush just outside our dining room window, and just happened to witness the moment one of the baby birds fledged. Back to the puzzle... stellar construction and cluing today which is not at all surprising, since we see that individually from Brooke and Rebecca. It was fun to see a collaboration from them. My favorite entry today was AND I QUOTE - such a fun phrase. This puzzle was an enjoyable way to begin my Tuesday.
Brooke Husic Rebecca Goldstein