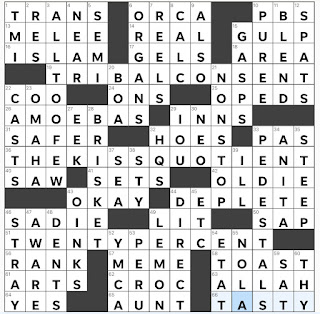 Theme Answers:
TRIBAL CONSENT (19A: Topic in the U.N. Declaration on the Rights of Indigenous Peoples)
THE KISS QUOTIENT (36A: 2018 Helen Huang novel)
TWENTY PERCENT (51A: One-fifth)
Theme synopsis: Each theme answer is IN the word TENT.
Things I learned:
Random thoughts and interesting things:
Geography review:
The INTENT of today's puzzle is to provide theme answers that appear IN the word TENT. I enjoy when the puzzle's theme requires a different parsing of the title. I guessed from the title what was going on, but it was still fun to discover. It almost seems as if this puzzle is scaring itself, with two scared sounds - GULP and EEK - and a surprised breath - GASP. I enjoyed the paired clues for PUREE and BLEND [Liquefy in the kitchen] and the clue for TMI (1D: "Eww, don't finish that story!") Other fun answers: ALL TOO FEW, NONSTOP, and PEDESTALS. This puzzle was a great start to my Friday.
Erik Agard