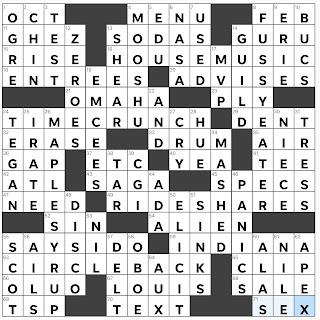 Theme Answers:
HOUSE MUSIC (16A: Genre with roots in the Chicago club scene)
TIME CRUNCH (24A: Period right before a deadline)
RIDE SHARES (49A: Some carpools)
CIRCLE BACK (63A: Discuss again at a later time)
Theme synopsis: The FRONT word of each theme answer can follow the word FULL to create a new phrase. We have FULL HOUSE, FULL TIME, FULL RIDE, and FULL CIRCLE.
And now a word from our constructors:
Wendy: It is a total honor to work with Brooke -- she is a true crossword genius and an interesting, thoughtful, kind person. I learned a ton from her -- including how to set up a clueing spreadsheet and how to find an interesting way of clueing something that has been done a million times (i.e., 68-Across, Buy-one-get-one event and 38-Down, Road Goop). I also loved learning about HOUSEMUSIC! I am looking forward to more collabs!
Brooke: So excited for my and Wendy’s collaboration debut! Wendy is such a kind person and I am so glad that we’ve become friends over the past several months, and so grateful to have learned so much from her in puzzlemaking and beyond! This was so fun to make together — Wendy’s grid skills are unreal amazing. I love that we got Andrea GHEZ and SEX positive into the puzzle, and really enjoyed our email thread of ADA Limon poems that ensued after cluing this puzzle together; I really like this one.
Things I learned:
Random thoughts and interesting things:
Geography review:
What an enjoyable set of theme answers today! They're all great phrases - I particularly enjoyed TIME CRUNCH and CIRCLE BACK. In addition to the (many) answers I've highlighted above, I also liked FUSSY EATER, and the clue for TEXT (70A: Chat with thumbs). This puzzle was a fabulous way to begin my Thursday!
Brooke Husic Wendy L. Brandes