Title: BREAK UP THE BAND 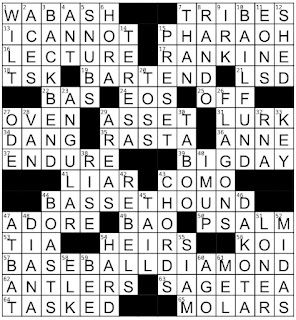 Theme Answers:
BARTEND (19A: Make and serve drinks)
BASSET HOUND (44A: Droopy-eared dog)
BASEBALL DIAMOND (57A: Playing field in "The Sandlot")
BACKBEND (3D: Yoga or gymnastics move)
BAIL FUND (10D: Organization such as Free the 350)
Note: Edited to add the vertical themers I initially missed!
Theme synopsis: The word BAND is broken by each theme answer. As you move from the top to the bottom of the puzzle, the BA- and -ND become farther apart in the horizontal theme answers.
Things I learned:
Random thoughts and interesting things:
Geography review:
This split-word theme is a classic theme type. I really enjoyed the added level to the theme today that saw the BREAK UP of the BAND progress more as we moved down through the horizontal theme answers. This theme arrangement is enabled by the puzzles left-right mirror symmetry. I also thought it was a nice touch (intended or coincidental) that the last clue in the puzzle referenced the Spice Girls, a British pop group that is no longer together in its original configuration. This puzzle was a delightful start to my Thursday.
Matthew Stock