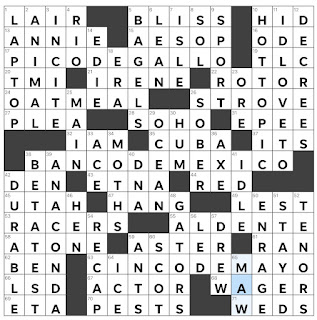 Theme Answers:
PICO DE GALLO (17A: Topping for molletes)
BANCO DE MEXICO (38A: Financial institution whose name can be found on pesos)
CINCO DE MAYO (63A: Spring holiday)
Theme synopsis: Each theme answer has the word CODE hidden in it.
Things I learned:
Random thoughts and interesting things:
Geography review:
I thought about not writing about today's theme...after all, it's a SECRET. I liked the consistency of the CODE containing answers all being Spanish phrases of the format ___CO DE ___. Some nice long downs in the upper right and lower left corners today: HOT TOPIC, I'D LOVE TO, BETA TEST, ANACONDA. I also liked the inclusion of the word HID (10A: Kept away from prying eyes) in a puzzle with the theme SECRET CODE. This puzzle was a great way to begin my Wednesday.
Answer to Geography quiz: The states next to Idaho are OREgon, Washington, Montana, Wyoming, Utah, and Nevada. Idaho also borders British Columbia, Canada.
Zhouqin Burnikel