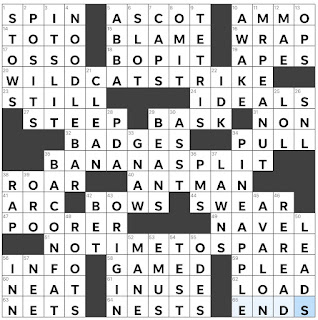 Theme Answers:
WILDCAT STRIKE (20A: Unauthorized action by unionized workers)
BANANA SPLIT (35A: Order at an ice cream parlor)
NO TIME TO SPARE (51A: "Hurry!")
Theme synopsis: The last word of each theme answer is a bowling term. Specifically, each word is a term used to describe pins that have been BOWLED OVER. We have a STRIKE (knocking down all of the pins), a SPLIT (knocking down the pins in the middle, leaving pins standing at each side), and a SPARE (knocking down all of the pins remaining after your first BOWL).
And now a word from our constructor:
Malaika: About a year ago, the Bucks refused to play (https://en.m.wikipedia.org/wiki/2020_American_athlete_strikes) in light of the racist police violence in Wisconsin. When a group of employees organizes to stop work without the help or authorization of their / a union, it's called a WILDCAT STRIKE. What a badass phrase with a badass meaning! I wrote that down in my "desperately want to put this in a puzzle" list of words, and here we are!
This is my first solo puzzle for the USA Today! I'm so proud of how this grid turned out, with all the food-related bonuses and interesting shapes. (I love big conglomerates of black squares, but a lot of other publications think they're inelegant.) I hope it was as fun to solve as it was to make!
Things I learned:
Random thoughts and interesting things:
This is a lovely puzzle to start off the week. Three excellent theme answers make a straightforward theme shine. I also enjoyed all of the food mentioned in this puzzle: PINEAPPLE (tacos al pastor), OSSO buco, potatoes (though I'd rather eat them than use them as AMMO), a NOODLE BAR with udon and soba, BEANS in a burrito, gravy with BACON FAT, MR. PEANUT, and, of course, a BANANA SPLIT. No wonder I'm hungry! Interestingly, we also saw BANANA SPLIT as a theme answer less than a month ago.  (Nothing wrong with that - I just like data!) I liked the game content today: BOP IT, TETRIS, Portal, and AVALON. Fun cluing today, with a shoutout to STILL (23A: "Are you ___ watching?" (question from a streaming service)) and CAPS (7D: Feature of the last word in this CLUE). Congrats to Malaika on her solo debut at USA Today. We previously enjoyed her constructing skills in a collaboration with Matthew Stock. Malaika curates the 7xwords project, and she also blogs about the Monday USA Today crosswords over on Diary of a Crossword Fiend. When Malaika sent me her notes about the puzzle, I asked her if she was going to blog her own puzzle, but she's on vacation this week. This puzzle was a delightful way to begin my Monday.
Malaika Handa