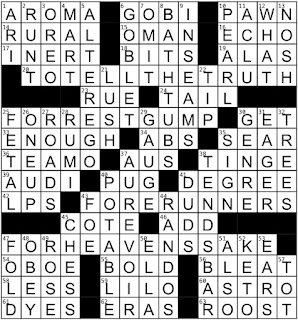 Theme Answers:
TO TELL THE TRUTH (20A: "If I'm being honest...")
FORREST GUMP (25A: Tom Hanks title role)
FORERUNNERS (43A: Predecessors)
FOR HEAVEN'S SAKE (47A: "Oh, give me a break!")
Theme synopsis: The first theme answer begins with the letters TO-. The rest of the theme answers begin with the letters FOR-. We have one TO- (1 2), and three FOR-s (3 4s).
Things I learned:
Random thoughts and interesting things:
Geography review:
Here is a transcript of my inner dialogue while solving today's puzzle: Why is there only one TO, and three FORs...Ooooooh! I get it!" I thoroughly enjoyed this clever theme with its rewarding "Aha!" moment, and its solid set of theme answers. (Side note: Kate Hawkins also constructed today's New York Times puzzle which I am looking forward to solving.) I enjoyed learning about Nona Gaprindashvili today. I also liked the grid shape of this puzzle. It's visually appealing with those "slides" of black squares going through the center of the puzzle. This puzzle was a delightful way to begin my Tuesday. (Today is the 27th anniversary of the day I became a mom: Happy birthday to my son, Sean!)
Kate Hawkins