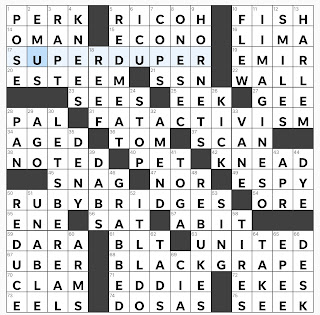 Theme Answers:
SUPER DUPER (17A: Terrific)
FAT ACTIVISM (31A: Movement that advocates against systemic weight bias)
RUBY BRIDGES (50A: "Through My Eyes" autobiographer)
BLACK GRAPE (68A: Dark-colored fruit)
Theme synopsis: The first word of each theme answer can be placed in front of the word TUESDAY to form a new phrase. We have SUPER TUESDAY, FAT TUESDAY, RUBY TUESDAY, and BLACK TUESDAY.
Things I learned:
Random thoughts and interesting things:
Geography review:
When I see a puzzle constructed by Zhouqin Burnikel on a day other than Sunday or Wednesday, I know there's probably a specific reason - such as running a TUESDAY PUZZLE on the corresponding day of the week. When I first saw the title of today's puzzle, I wondered if it was truly the title, or a placeholder that hadn't gotten replaced with the real title. (I was reminded of Zhouqin Burnikel's FOUR BY FOUR puzzle that was originally posted as if it were constructed by "FOUR.") The theme answers here are all stellar and seemingly unrelated, making for a beautiful "Aha!" moment when I looked at the completed puzzle and said, "SUPER DUPER? SUPER TUESDAY!" In the puzzle's own words: LET'S BE REAL, this theme...IT'LL DO. I also enjoyed the answer I IMAGINE SO. That I-I looked like it must be wrong when I first filled it in. This TUESDAY PUZZLE was a delightful way to begin my TUESDAY.
Zhouqin Burnikel