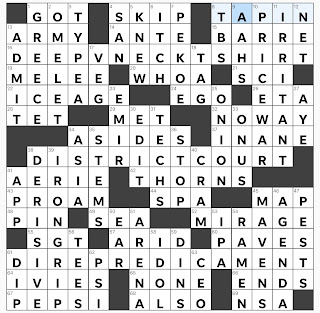 Theme Answers:
DEEP V-NECK T-SHIRT (16A: Collarbone-baring top)
DISTRICT COURT (38A: Local trial venue)
DIRE PREDICAMENT (61A: Disastrous situation)
Theme synopsis: The word DIRT is broken by each theme answer, with some letters appearing at the beginning of the answer, and the remaining letters appearing at the end (after the BREAK).
Things I learned:
Random thoughts and interesting things:
Geography review:
Although we frequently see this theme type in the USA Today puzzle, today's theme is ground-breaking. That is, the theme answers break up GROUND, or DIRT. I like how the break of the word DIRT progresses as we move downward in the puzzle, almost as if we are moving the DIRT from one side of the puzzle to the other. DIRE PREDICAMENT was my favorite theme answer, though I was grateful to not find myself in one while solving. DEEP V-NECK T-SHIRT took me a while to completely fill-in. The phrase doesn't exactly roll off the tongue, but it is a term that's used (googling the phrase returns over 62 million results). In non-theme fill, I liked DERISIVE, IRON GRIP, PRICE WAR, and IRRITANT. This puzzle was an enjoyable way to begin my Sunday.
After enjoying a few days off, I'm delighted to be back! I'm writing today's blog in Seattle (the beautiful, but currently smokey Pacific Northwest), where we have been spending a few days with our son. We're headed home today, so I appreciate any vibes you might send my way for smooth travel. Many thanks to Will Nediger, Erica Hsiung Wojcik, and Mollie Cowger for guest blogging! I've enjoyed reading their takes on the puzzles, and hope you have as well.
Zhouqin Burnikel