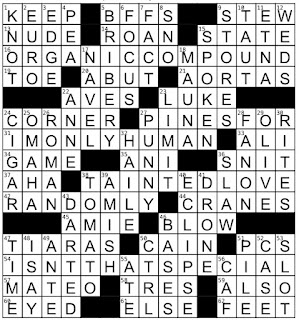 Theme Answers:
ORGANIC COMPOUND (16A: Substance containing carbon molecules)
I'M ONLY HUMAN (31A: "Mistakes happen!")
TAINTED LOVE (38A: 1980S Soft Cell hit)
ISN'T THAT SPECIAL (54A: "Well, whoop-de-doo!")
Theme synopsis: The last word of each theme answer PLUS the word INTEREST yields a new phrase. We have COMPOUND INTEREST, HUMAN INTEREST, LOVE INTEREST, and SPECIAL INTEREST.
Things I learned:
Random thoughts and interesting things:
Geography review:
I trust this puzzle held your INTEREST long enough for you to successfully solve it. My favorite theme answer today was the sassy, "ISN'T THAT SPECIAL?" This puzzle presented some challenges to me, as some of the things I didn't know took a bit of figuring out. After all, I don't know everything since I'M ONLY HUMAN, but that's okay! It was a good challenge and an enjoyable way to begin my Thursday.
Wendy L. Brandes