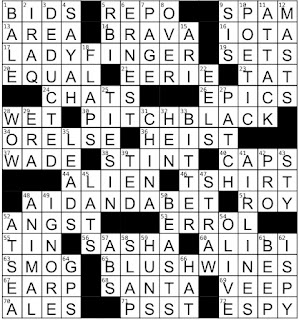 Theme Answers:
LADYFINGER (17A: Tiramisu cake)
PITCH BLACK (30A: Completely dark)
AID AND ABET (48A: Assist in a crime)
BLUSH WINES (65A: Pink alcoholic drinks)
Theme synopsis: The FIRST word of each them answer can follow the word FIRST to make a new phrase. We have FIRST LADY, FIRST PITCH, FIRST AID, and FIRST BLUSH.
Things I learned:
Random thoughts and interesting things:
Geography review:
This was an enjoyable and appropriate puzzle for the FIRST day of the work week. Interestingly, (well, to me anyway...) this is the second time this month we've seen PITCH BLACK as a theme answer. Although this puzzle seems conflicted about whether it wants to ATTACK or IGNORE, it did not leave me feeling BITTER at all, even when it threatened, "...OR ELSE!" This puzzle was a delightful way to begin my Monday.
Tracy Gray