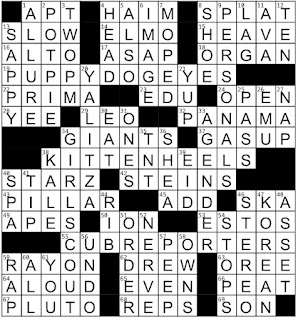 Theme Answers:
PUPPY DOG EYES (19A: Sad, innocent look)
KITTEN HEELS (38A: Appropriate footwear for the catwalk)
CUB REPORTERS (55A: Novice journalists)
Theme synopsis: The FIRST WORD of each theme answer is the name used for a BABY animal.
Things I learned:
Random thoughts and interesting things:
Geography review:
Lucky YOU! And lucky me, to get to solve this delightful puzzle. BABY animals are, of course, adorable. Today's puzzle utilize three great theme answers that begin with the names of BABY animals. PUPPY DOG EYES was the first theme answer I discovered, and the one that tipped me off to the theme. I, appropriately said, "Awww."  I enjoyed everything about this puzzle and it was a delightful way to begin my Friday.
I wanted to give you an update on some information I found out about the updated USA Today puzzle app. Someone had asked me whether the weekly tournament puzzle was available on the new app. I sent this question in to tech support, and discovered, as I mentioned the other day, there's a new email address for questions about the app (crossword@gannett.com). I did hear back (although it took a week), and the answer is no, the tournament puzzles are not available on the new app format. I was told the tournament puzzles may be available later this year. I am still using the old app, as my old iPad does not support the update. The tournament puzzles are still accessible on the old app, and there aren't many of us participating in the tournament anymore, which has increased my ranking in the standings! (I'm currently in 4th place...out of 4.)
Claire Rimkus