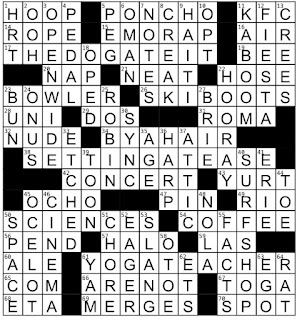 Theme Answers:
THE DOG ATE IT (17A: Excuse for missing homework)
SETTING AT EASE (38A: Making comfortable)
YOGA TEACHER (61A: Instructor on a mat)
Theme synopsis: Each theme answer is keeping the word GATE within its letters.
Things I learned:
Random thoughts and interesting things:

What a fun puzzle! I especially enjoyed the cluing today, as you could see from my comments above. In addition to those answers mentioned above, I especially liked OPEN WIDE, BY A HAIR, and KABOOM. This puzzle was a delightful way to begin my Monday.
Rebecca Goldstein