Title: GET YOUR MONEY RIGHT 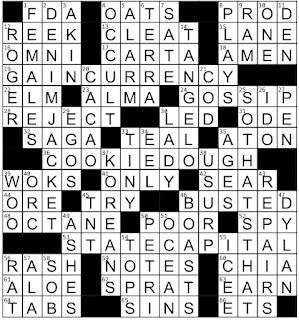 Theme Answers:
GAIN CURRENCY (19A: Become more accepted)
COOKIE DOUGH (36A: Ice cream flavor with chocolate chips)
STATE CAPITAL (53A: Tepic or Topeka, for example)
Theme synopsis: The RIGHT-most word of each theme answer is a synonym for MONEY.
Things I learned:
Random thoughts and interesting things:
Geography review:
A straightforward theme today - one of the few times I correctly guessed the theme from the title. It was fun to uncover each theme answer and discover the MONEY synonyms. Although I've heard the phrase GAIN CURRENCY, it's not a phrase I hear often, so it took some crossings to figure out. I appreciate that the meanings of CURRENCY, DOUGH, and CAPITAL all change from the way they are used in the theme answers to the way they relate to the theme. My favorite answer today was SO THAT'S THAT - such a colorful phrase. I also liked DENIM JACKET, as it evoked memories of a favorite piece of clothing from my high school days. This puzzle was a great way to start my Wednesday.
Zhouqin Burnikel