Title: IN A SPOT 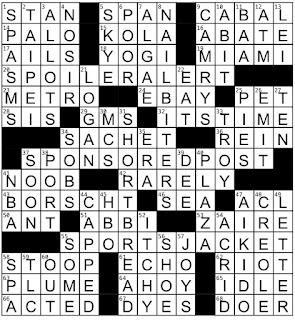 Theme Answers:
SPOILER ALERT (20A: Warning prior to a plot reveal)
SPONSORED POST (37A: Promoted blog entry)
SPORTS JACKET (55A: Blazer alternative)
Theme synopsis: Each theme answer begins with SPO- and ends with -T. Therefore, each theme answer is IN the word SPOT.
Things I learned:
Random thoughts and interesting things:
Geography review:
SPOILER ALERT - I liked this puzzle! A nice split-the-word theme with solid theme answers. I especially liked the delightful theme answer SPOILER ALERT.  NAILBITERS and SHORTBREAD were great long non-theme bonuses, and I also liked BORSCHT and IT'S TIME. This puzzle was an enjoyable way to begin my Wednesday.
Zhouqin Burnikel