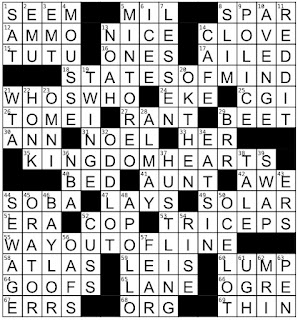 Theme Answers:
STATES OF MIND (18A: Moods)
KINGDOM HEARTS (35A: Video game series in which a hooded Mickey Mouse asks, "Say, fellas, did somebody mention the Door to Darkness?")
WAY OUT OF LINE (55A: Totally uncalled for)
Theme synopsis: When the word UNITED is placed in FRONT of the first word of each theme answer, a new phrase is formed: UNITED STATES, UNITED KINGDOM, UNITED WAY.
Things I learned:
Random thoughts and interesting things:
Geography review:
This puzzle played on the challenging side for me, but that could honestly be more a result of my exhaustion following a long week, rather than a reflection on the puzzle. It took my brain a long time to see WHO'S WHO (21A: Listing of notables). This was in part due to my mind refusing to think of any answer except BEEP for HONK (22D: Sound the horn). I had the K of HONK and my mind still wanted the answer to be BEEP - as I said, I'm a bit tired!
In spite of my self-imposed challenges, this puzzle was an enjoyable solve. When the first two theme answers paired with UNITED to form country names (UNITED STATES and UNITED KINGDOM), I found myself wishing there was another "UNITED" country that would work for the theme. Alas, UNITED Arab Emirates is the only other country whose name begins with the word UNITED.
Overall, an enjoyable solve and good exercise for my tired brain.
Zhouqin Burnikel