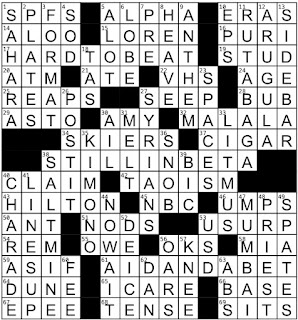 Theme Answers:
HARD TO BEAT (17A: Really good)
STILL IN BETA (38A: Not quite ready for full release)
AID AND ABET (61A: Assist in a crime)
Theme synopsis: The last (TAIL) words of the theme answers are anagrams of each other. That is, BEAT, BETA, and ABET have the same letters MIXed differently.
Things I learned:
Random thoughts and interesting things:
Geography review:
It's been a while since we've seen an anagram theme, so it was fun to see one today. I enjoyed seeing RUTABAGA and ARUGULA seemingly appearing in their own SIDE (salad) BAR in the upper right corner of the puzzle. I enjoyed beginning my Wednesday by solving this puzzle.
Zhouqin Burnikel