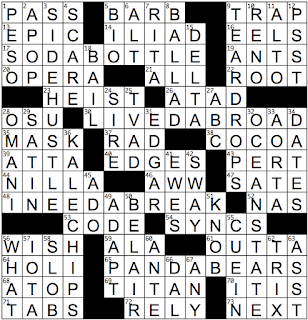 Theme Answers:
SODA BOTTLE (17A: Recycling bin item)
LIVED ABROAD (30A: Resided in a foreign country)
I NEED A BREAK (48A: Words from the weary)
PANDA BEARS (65A: Bamboo-loving animals)
Theme synopsis: Each theme answer contains the string DAB which is BAD backwards, or TURNed.
Things I learned:
Random thoughts and interesting things:
Geography review (and more random thoughts/interesting things):
Hi team! This is old news by now, but the Boswords Spring Themeless League starts tomorrow and you should do it! It's pretty rare that themeless puzzles are clued at an easy level ("smooth" in Boswords terms) so this is a great opportunity to solve easier themeless puzzles. I'm glad Matthew teed me up yesterday to shout out *his* puzzles today — check out his and Quiara's Atlantic puzzle and his Universal offering. On the harder side, I'm really hype about Ryan McCarty's new blog and the great Paolo Pasco's most recent two puzzles on his blog (I mean, also all of them). There's a ton of great puzzle energy right now and you can get a list of daily puzzle links emailed to you daily by Matt Gritzmacher.
I really liked the elegance of TURNing BAD here, and as you've heard me say for the past two Sundays, I love Burnikel puzzles. This was a breezy solve and a great way to start my morning.
xoxo, Brooke
Zhouqin Burnikel