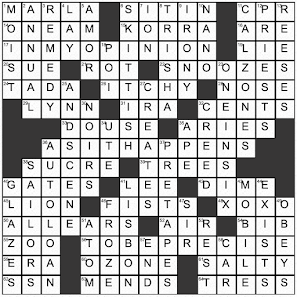 Theme Answers:
IN MY OPINION (17A: "Personally, I think . . .")
AS IT HAPPENS (36A: "Funny you should ask . . .")
TO BE PRECISE (56A: "Let me get more specific . . .")
Theme Synopsis: Each answer is a three-word phrase that follows the enumeration (2, 2, 7).
Things I learned:
Random thoughts and interesting things:
Geography review
Happy Saturday, y'all! Matthew back to help round out February on the best puzzle blog.
The USATXW is no stranger to pairing themes with specific calendar dates (this recent Amanda Rafkin banger comes to mind), and I couldn't be more of a fan of this trend. 2, 2, 7 phrases ... on 2/27 ... with a "227" reference leading off the puzzle at 1-Across?? Fantastic stuff. I especially love how lively the theme answers are — each a super in-the-language phrase with a great clue. The only other 2, 2, 7 I could come up with was IN AN INSTANT, which I also like but not as much as the ones used here. What a stellar find! The rest of the grid is delightful, with a nice visual X-ness in the block layout. All the thumbs up from me!
Elsewhere in puzzles, USATXW mega-star Brooke Husic dropped a very excellent themeless on her blog this morning. Check it out if you're up for a challenge!
XOXO,
Matthew
Erik Agard