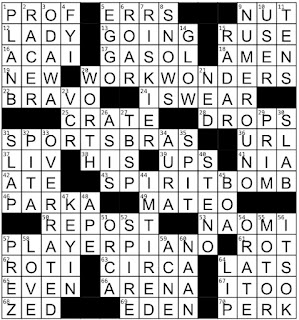 Theme Answers:
WORK WONDERS (20A: Have an amazingly positive effect)
SPORTS BRAS (31A: Support for some athletes)
SPIRIT BOMB (43A: Powerful attack in "Dragon Ball)
PLAYER PIANO (57A: Instrument that uses rolls)
Theme synopsis: The FIRST word of each theme answer can follow the word TEAM. When we PUT THE TEAM FIRST, we have TEAMWORK, TEAM SPORTS, TEAM SPIRIT, and a TEAM PLAYER.
And now a word from our constructors:
Brooke: It is impossible for me to find the words to describe my happiness that this puzzle’s running and my gratitude for Ade’s collaboration and (more importantly) friendship. After Ade tweeted about his previous USAT puzzle back in November, I joined in the chorus of replies praising the puzzle… and I was shocked that when Ade replied to my compliments, he knew who I was (even though I use an alter ego on twitter)!! Thus began a friendship that even after a few months is very dear to me. I suggested collaborating and this puzzle came together amazingly over the month of December (I was in NYC at the time, and we joked that we could wave to each other across the boroughs if we faced the right directions).
I admire Ade as a constructor and a person. On the former front, you’d be remiss to not solve his two NYT contributions and this banger in the American Values Club last month (as for the latter front: read his bio @ the AVX link!!!!! He’s amazing). Also, it is unfathomable to me that Ade and the rest of the Vox crossword team write a puzzle every week. How lucky are we, as solvers, to benefit from this!
As for the puzzle—it was supremely fun to make it together and my favorite Ade clues are his take on ZED as [“Men in Black” chief] (this preference actually dictated the fill we chose for that corner) and SLAP as [___ bass (music technique)]. I could write 100 clues for each of those entries and never come up with something as fun!
Ade: For those who solve and/or create crossword puzzles, I am sure most of you know of seminal moments that have led you to the stage of your crossword development you currently are in. I could tell almost immediately that having Brooke reach out with her idea on this puzzle was going to be one of those moments in terms of my crossword constructing (as well getting the honor to know a wonderful person who is such a positive influence and shining light)! Being a relatively new constructor, as well as being keenly aware of the impact Brooke had made in the presentations and direction of her crosswords in such short order, her invitation to work on her idea meant so much to keeping my self-confidence rock solid and thinking that I can indeed consistently create good puzzles. Most of our jam session to create this particular puzzle was me picking her brain about her philosophy in puzzle making, and I learned so much. Seeing this puzzle running is an indelible reminder of how lucky I was to work with someone so talented and thoughtful.
Puzzlewise, I cannot love the ODAWA entry enough, as well as the clue to LADY that allowed me to educate myself on a wonderful person [“The ___ Chablis, aka the Grand Empress of Savannah”]. See the Brooke-engineered crossings of SPORTS BRAS and OVERRATED, I almost think the latter could use many elements of the clue to the former, but written as “Taunt that’s a complete lack of support for some athletes,” referring to the “OVER!-RATED!” chants that student sections make when highly-ranked teams lose in a road game. This might/will come as a shock to almost everyone reading, but the clue and entry combo to GASOL was all Brooke! Finally, just seeing NUMERO UNO as a long down entry makes me smile.
Oh, and a message to future crossword constructors: If someone pitches you an idea and shows intent that they would like to work with you in putting it together, JUMP AT THE CHANCE!! It’s a game-changer waiting to happen, depending on the person. I should know!
Things I learned:
Random thoughts and interesting things:
Geography review:
Many thanks to Brooke for guest blogging yesterday! A treat to have her as a co-constructor today. A fun theme with solid theme answers; my favorite was WORK WONDERS. Although the theme is TEAM FIRST, I noticed that the first word of the first three theme answers can also follow the word TEAM, giving us a WORK TEAM, a SPORTS TEAM, and a SPIRIT TEAM. Alas, PLAYER TEAM is not a thing! Lots of enjoyable clues and answers today. In addition to the entries I've highlighted above, I also liked NUMERO UNO and OVERRATED. (FYI, this puzzle is not OVERRATED!) This puzzle was definitely a delightful way to begin my Monday.
Adesina O. Koiki Brooke Husic