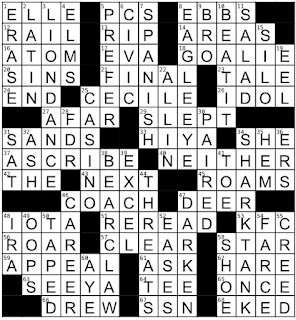 Theme Answers:
LION DANCE (3D: Chinese New Year performance)
EAGLE EYE (8D: Watchful person)
SHARK TANK (34D: TV show with entrepreneurs and investors)
BEAR CLAW (38D: Pastry often filled with almond paste)
Theme synopsis: The first word of each theme answer is an APEX PREDATOR. We have a LION, an EAGLE, a SHARK, and a BEAR.
Things I learned:
Random thoughts and interesting things:
An APEX PREDATOR is an animal at the top of a food chain. APEX PREDATORS, such as LIONs, EAGLEs, SHARKs, and BEARs, do not have natural predators. I enjoyed this theme - it was fun to see the predators appear. I liked the choice of making the theme answers vertical so the APEX PREDATORS were on the top. I also notice that the puzzle includes some prey for these APEX PREDATORS in the form of DEER, a HARE, and an EEL. It was a nice touch to include the word THREATS in the puzzle, as these animals can certainly be a danger to animals below them in the food chain. The phrase APEX PREDATOR reminds me of the song of this name from the Broadway musical, Mean Girls, and this song has been my earworm since I read the title of the puzzle! This puzzle was an enjoyable way to begin my Friday.
Hannah Slovut