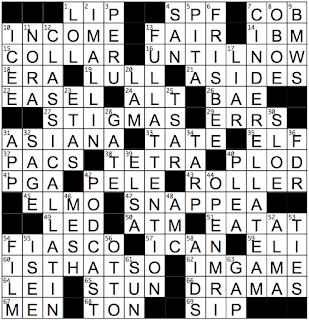 Theme Answers:
CINDERELLA TEAM (7D: Successful underdog)
CLASSICAL LATIN (12D: Roman Republic language)
FULL ATTENTION (13D: Uninterrupted concentration)
Theme synopsis: Each theme answer is vertically oriented and contains the character string LLAT, which is TALL "STANDING" on its head.
Things I learned:
Random thoughts and interesting things:
Geography review:
It's me again! I hope you find this fairly long post interesting — I'd love to hear what you think in the comments. I'll be back tomorrow as a constructor with a really fun collaboration.
Elsewhere in the puzzleverse, you can still sign up for the Boswords Spring Themeless League! The tournament consists of a themeless puzzle every week for ten weeks and features USA Today constructor Rachel Fabi, eight other supremely talented puzzlemakers, and myself. You do not have to actually ever attend the in-person broadcast, and can solve the puzzles on your own time. The "smooth" version of the clues should be akin to the USA Today difficulty level. Also, a very happy Sunday to friend-of-the-blog Matthew Stock who's written a banger of a New York Times Sunday puzzle today.
I really enjoyed the USA Today crossword today and clearly learned a lot! I appreciate puzzle titles that hit the trifecta of (1) what to look for, (2) where to find it, and (3) how to find it in terms of the theme content. In this case we have (1) TALL, (2) in the vertical entries, and (3) standing on end, all of which are communicated through "Standing Tall." Burnikel is one of the greats and I'm privileged to blog her work.
xoxo, Brooke
Zhouqin Burnikel