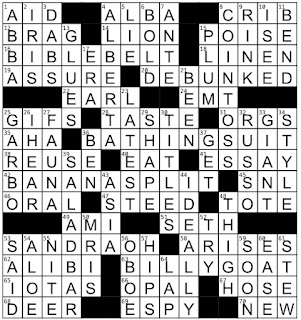 Theme Answers:
BIBLE BELT (16A: Region with many churches)
BATHING SUIT (36A: Beach getup)
BANANA SPLIT (42A: Dessert in a boat)
BILLY GOAT (63A: Bearded farm dweller)
Theme synopsis: All of the theme answers either begin with BI- and end with -T, or begin with B- and end with -IT. Therefore, all of the theme answers are inside of BIT.
And now a word from our constructor:
Evan: I like grids that give you a lot of spatial leeway. This 9/11/11/9 theme set was easy to work with, and I was pleased with the eight-letter bonus fill this enabled, especially in the NE and SW. It was nice getting some inclusive cluing in at 4-Down, 40-Across, 41-A, and 56-D.
Things I learned:
Random thoughts and interesting things:
Geography review:
There were so many things I wanted to highlight from today's crossword - the sign of an engaging puzzle! Now I want to EAT some shabu-shabu or feijoada, followed by a BANANA SPLIT. Before I do that, though, I'm going to make a donation to a charitable organization (the ACLU is my choice, but you have options) and then receive 42 puzzles from Grids for Good. This is a great opportunity to support the work of good people and receive original work from excellent puzzle constructors. Just in time to provide entertainment for the stay-at-home holiday weekend!
Evan Kalish