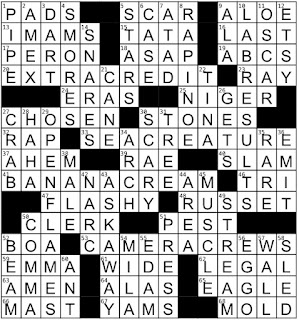 Theme Answers:
EXTRA CREDIT (20A: Teacher's bonus offering)
SEA CREATURE (33A: Manta, for example)
BANANA CREAM (41A: Pie variety)
CAMERA CREWS (53A: TV production teams)
Theme synopsis: Each theme answer contains the letter string A-C-R-E spanning the two words. Therefore, each theme answer is HOLDING an ACRE of LAND.
And now a word from our constructor:
Evan: Here was another fun concealed-word concept. I love when there are several solid options available. The grid is fairly straightforward, with a couple of solid long downs in the NE/SW; though my favorite bits of bonus fill were at 8- and 43-Down.
I love the clue for 27-D, which I can’t claim credit for, though I was happy to be able to reference “Stranger Than Fiction” in the clue for 59-Across. That film was underappreciated.
Things I learned:
Random thoughts and interesting things:
Geography review:
This was a delightfully smooth puzzle. A nice hidden word theme with some interesting theme answers. As I was solving the puzzle, I found myself starting to feel hungry. There is definitely a food mini-theme going on here with BANANA CREAM pie, RUSSET potatoes, YAMS topped with marshmallows, S'MORES (more marshmallows!), Pie ALA mode (more pie!), a candy CANE, Maryland CRAB, EDAM cheese, and EGGO waffles. Pardon me while I go in search of a mid-morning snack.
Evan Kalish