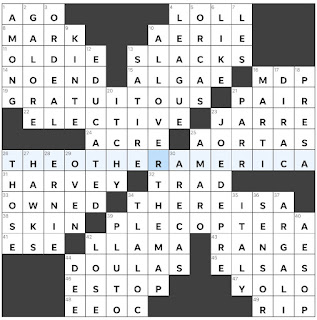 Theme Answers:
THE OTHER AMERICA (26D: Read the first letter in each clue to get a quote from this '67 speech)
Theme synopsis: Half of this puzzle is fairly straightforward, while the other half is much more challenging, and might be described as ALL OVER THE MAP (10D: At sixes and sevens).
And now a word from our constructor:
Erik: Not to flatter myself by comparing my own puzzle to one of the best puzzles of 2022, but looking back on this one it reminded me of this Brooke Husic puzzle - which is a good excuse to tell you to check out These Puzzles Fund Abortion (you can still get last year's pack, and they're dropping a new one in March!)
Back to me:
Although I appreciate receiving constructor notes, they're definitely always optional. And though Erik has sent notes before, it's a rare occasion. In fact, his email with these notes said, "surprisingly enough, i have a constructor note..." After reading the note, I anticipated today's puzzle with some trepidation. You see, I'm familiar with the amazing puzzle of Brooke's that Erik referenced. You can check it out now if you're not; I'll wait... The thing about Brooke's puzzle that makes it impactful is that it is basically unsolvable. And so, I wondered what Erik had in store for us.
Before I even began solving, I was struck by this grid. I noticed that this puzzle is essentially broken into two halves, connected only by that one white square in the center of the puzzle. This observation would turn out to be true, but I didn't know that yet. (I also noticed that the black squares on the bottom edge of the puzzle seem to be giving us the finger - ha!)
Once I began solving, it quickly became apparent that there are two distinct halves in this puzzle. At one point I had the entire upper left section of the puzzle, and only one answer in the bottom right. When I filled in ALL OVER THE MAP, extending into the bottom of the puzzle, it revealed that the one answer I had was in fact, incorrect. Well, there you go. This puzzle is making a point, and it does so brilliantly.
I've grouped all my comments about specific answers today under "Random thoughts and interesting things," although I could have just as easily put the majority of them under "Things I learned!"
Random thoughts and interesting things:
I'm guessing many of us found today's puzzle a frustrating solve. Before you complain about some of these clues as unfair, I encourage you to take a step back and consider that that's the point. It's essentially a visual representation of what it's like to live in the two sides of AMERICA. Then perhaps reread THE OTHER AMERICA, and perhaps some other speeches of Rev. Dr. Martin Luther King Jr. Thank you, Erik, for this puzzle that challenged me and made me think, and was an interesting way to start my Monday.
P.S. I second Erik's encouragement to check out the reproductive-justice-themed puzzles in These Puzzles Fund Abortion. I will definitely let you know when the new puzzle pack is available in March.
Erik Agard