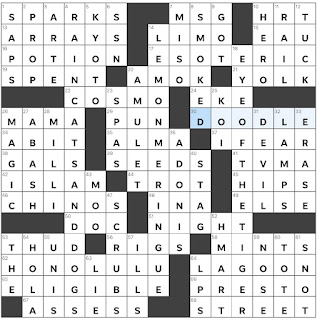 Theme Answers:
RAIN CATS AND DOGS (14D: Absolutely pour)
LEMON MERINGUE (14D: Lime Chiffon's friend in "Strawberry Shortcake")
EYE OF THE TIGER (18D: "Rising up, back on the street..." song)
Theme synopsis: The TOP word of each vertical theme answer can precede the word DROP, giving us RAIN DROP, LEMON DROP, and EYE DROP.
And now a word from our constructor:
Zaineb: my most favorite clues here are the ones for PROP, SMOKED, LAMPS, ISLAM, INA, & NIGHT
once again, many thanks to the editor ~
here is a picture of zubi on my tiger blanket :-)
Things I learned:
Random thoughts and interesting things:

Yesterday we were raising BEDs, and today we're dropping TOPs - that's fun! Three fantastic theme answers today. In addition to the answers I've already highlighted, I enjoyed ESOTERIC, ELIGIBLE, and DOODLE. Also, shoutout to the playful and funny clue for PROP (2D: A banana used as a phone, for example). Thank you, Zaineb, for this puzzle that was a delightful way to start my Wednesday.
One more thing today: I keep meaning to mention that if you are a constructor, I encourage you to consider applying to be on the Lil AVC X 2023 constructor roster. You'll find the application and more information here. Come create puzzles with me!
Zaineb Akbar