Title: IS THAT OK WITH U? 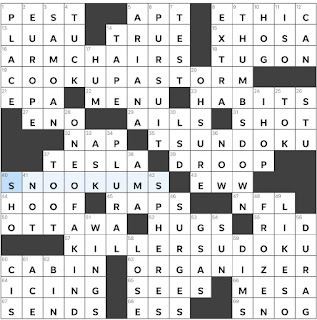 Theme Answers:
COOK UP A STORM (19A: Make a large quantity of food)
TSUNDOKU (35A: Japanese term for the act of buying books and never reading them)
SNOOKUMS (40A: Sweetie pie)
KILLER SUDOKU (57A: Number puzzle with elements of kakuro)
Theme synopsis: Each theme answer contains the letter sequence OKU.
And now a word from our constructor:
Ada: I don't have much to say about the puzzle, but I do have a cat photo!! This is my roommate's cat Pumpkin, who I've become good friends with. She wanders into my room and meows at me until I give her attention. Love ya Pumpkin! (For those wondering, the stuffed unicorn's name is Penelope.)
Things I learned:
Random thoughts and interesting things:

Is this puzzle OK WITH U? It's definitely OK WITH me! No THUMBS DOWN here. I guessed the theme from the puzzle's title, and was immediately interested in solving to discover the theme answers, as OKU is not a common letter sequence. I enjoyed all of the theme answers today - the adorable SNOOKUMS was my favorite. ONE OF A KIND, LIKE SO, and OH SURE were also fun. Thank you, Ada, for this puzzle that was a great way to begin my Saturday.
P.S. Welcome to the Cats of Sally's Take, Pumpkin!
Ada Nicolle