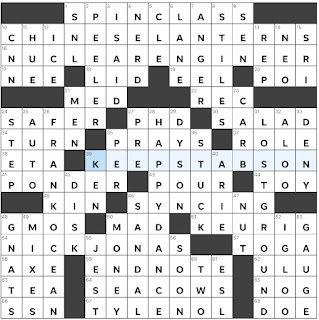 Theme Answers:
FRANK OCEAN (26D: "Channel Orange" singer-songwriter)
HAPPY DANCE (28D: Gleeful jig)
LOST GROUND (31D: Fell behind)
Theme synopsis: The BOTTOM word of each vertical theme answer is a type of FLOOR. We have an OCEAN FLOOR, a DANCE FLOOR, and the GROUND FLOOR.
And now a word from our constructor:
Actually, it's not a constructor note, but (perhaps even better?) it's a cat photo! After Rafa's cat made an appearance during a Boswords interview, I asked him to send me a picture of her so she could join the Cats of Sally's Take. Rafa says, "Her name is Georgia and we are besties!"
Things I learned:
Random thoughts and interesting things:

Even before beginning to solve this puzzle, I admired this interesting grid. All of today's theme answers are located in the bottom third of the puzzle. I appreciated the choice to align all of the FLOORs on the BOTTOM edge of the puzzle. The result of this is that the top third of the grid is essentially a themeless puzzle. Rafa made great use of that, giving us the fantastic stack of SPIN CLASS / CHINESE LANTERNS / NUCLEAR ENGINEERS. This puzzle definitely had me doing a HAPPY DANCE! Thank you, Rafa, for this puzzle, that was a delightful way to begin my Thursday. And thank you for sending me a picture of Georgia!
Rafael Musa