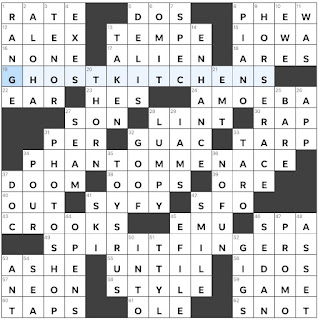 Theme Answers:
GHOST KITCHENS (19A: Facilities that prepare meals for delivery apps, often under fake restaurant names)
PHANTOM MENACE (34A: Titular term for Darth Sidious in a 1999 "Star Wars" movie)
SPIRIT FINGERS (49A: Cheerleader's hand gesture)
Theme synopsis: The first word of each theme answer is a type of specter. Today's SPECTRAL SERIES includes a GHOST, a PHANTOM, and a SPIRIT.
Things I learned:
Random thoughts and interesting things:

SPECTRAL SERIES is a science term referring to a method of characterizing light emitted by excited atoms. Hooray for science in crosswords, brought to us today by Nate Cardin, who is a chemistry teacher. You don't need to know about the science of SPECTRAL SERIES for this puzzle, however, since these specters are of the spooky variety, perfect for Halloween. In addition to the theme, I liked the apt crossing of GOOF (32D: Mess up) and OOPS (38A: "My bad!") Thank you, Nate, for this puzzle that was a perfect spooky start to my Halloween Monday. Happy Halloween!
Nate Cardin