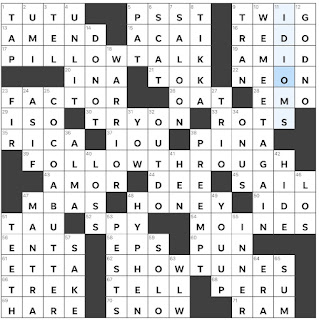 Theme Answers:
PILLOW TALK (17A: Intimate chat)
FOLLOW THROUGH (39A: Do what you said you'd do)
SHOW TUNES (62A: Sing-along songs at some piano bars)
Theme synopsis: The word TWO (a DOUBLE) is found BACKwards in each theme answer.
And now a word from our constructor:
Brooke: my favorite clues/answers are 20a, 50a, 10d, 18d, 49d, and 63d!
Things I learned:
Random thoughts and interesting things:

I was going to write that this theme was straightforward, but then I realized it actually isn't - ha! A fun take on a BACKward theme, with three enjoyable theme answers. Thank you, Brooke, for this puzzle that was an excellent way to begin my Friday.
Brooke Husic