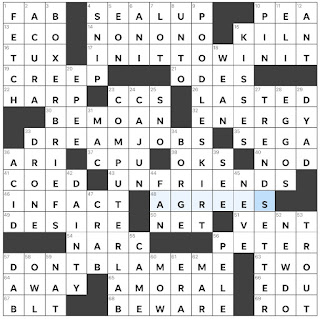 Theme Answers:
BOXER BRIEFS (3D: Hybrid underwear type)
COMPUTER LAB (23D: Room that might be used for printing)
POODLE SKIRT (9D: Popular piece of '50s fashion)
TREND SETTER (27D: Person who popularizes things)
Theme synopsis: Each vertical theme answer features the name of a DOG. Moving from left to right through the puzzle, the DOG names alternate between being on TOP of the answer, or being UNDERneath.
Things I learned:
Random thoughts and interesting things:

This is a fun theme with a solid set of theme answers. TOPDOG/UNDERDOG is a play by Suzan-Lori Parks, a revival of which opens on Broadway today! liked that the TOPDOGs touched the very top of the grid and the UNDERDOGs sank all the way to the bottom edge. Some great bonuses in the Across answers: DON'T BLAME ME, DREAM JOBS, and UNFRIENDS. Thank you, Amanda, for this puzzle that was a delightful way to start my Thursday.

One more thing: I have a follow up to last Friday's post. From that puzzle I learned about Pai Chongchitnant's YouTube Channel, Pailin's Kitchen, and her website, Hot Thai Kitchen. I commented that I had bookmarked the recipe for Thai Pineapple Fried Rice. Last night I made this recipe, complete with pineapple boats! It was a big hit, and I'll definitely make it again (though I'll probably skip the pineapple boats unless I'm entertaining).