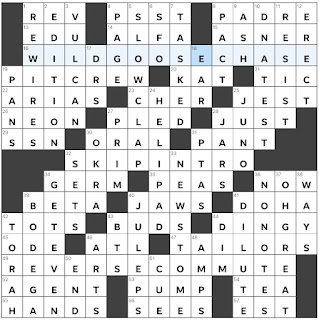 Theme Answers:
WILD GOOSE CHASE (16A: Foolish, chaotic search)
SKIP INTRO (32A: Option at the beginning of a Netflix episode)
REVERSE COMMUTE (49A: Drive to work against traffic)
Theme synopsis: The first word in each theme answer is a card in the game UNO: WILD, SKIP, REVERSE.
Things I learned:
Random thoughts and interesting things:

What a fun theme! As soon as I saw the title, I began thinking of UNO cards that might make up a theme. I correctly guessed that we would see SKIP and REVERSE, but somehow totally forgot about WILD. All three theme answers are fabulous. In addition to the answers highlighted above, I enjoyed VULCAN, NEWS TO ME, GET EVEN, and OH GREAT. Shoutout to a couple of favorite clues: (19A: F1 racing or "RuPaul's Drag Race" assistants) for PIT CREW, and (55A: Body parts outlined to make turkey drawings) for HANDS. Also, this is Anna Gundlach's first solo editing byline - hooray! Thank you, Rebecca, for this puzzle that was a delightful way to start my Monday.