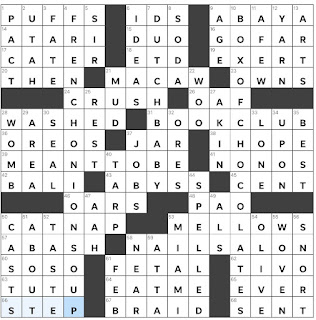 Theme Answers:
FRENCH ONION SOUP (4D: Savory bowlful topped with bread and cheese)
DUTCH BABY (7D: Fluffy oven-baked pancake)
BOX OF CHOCOLATES (10D: Valentine's Day gift)
Revealer:
BRAID (67A: Word that can follow the first words of 4-, 7- and 10-Down)
Theme synopsis: Each of the theme answers is a food item whose first word, as the revealer tells us, is a type of PLAIT. Today's SERVING of PLAITS: FRENCH BRAID, DUTCH BRAID, and BOX BRAID.
And now a word from our constructor:
Zaineb: i love french onion soup!!!!!
Things I learned:
Random thoughts and interesting things:

This puzzle is SERVING up some delicious theme answers and a clever theme! I like that FRENCH ONION SOUP, DUTCH BABY, and BOX OF CHOCOLATES were presented as Down answers resembling the strands of a BRAID. I had already deduced the theme by the time I uncovered the word BRAID, so it was a nice bonus as well as confirmation. Other great answers: MEANT TO BE, NAIL SALON, and MELLOWS. This puzzle was much more than SO-SO! Thank you, Zaineb, for this puzzle that was a delightful way to start my Wednesday.
Zaineb Akbar