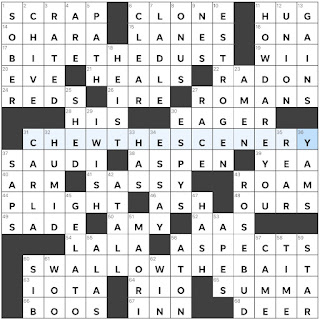 Theme Answers:
BITE THE DUST (17A: Be defeated)
CHEW THE SCENERY (31A: Overact)
SWALLOW THE BAIT (60A: Get reeled in)
Theme synopsis: The first word of each theme answer is a step in EATing. First you take a BITE, then you CHEW, and finally, you SWALLOW.
Things I learned:
Random thoughts and interesting things:

I'm always delighted to hear those two lovely words, "LET'S EAT!" I enjoyed this creative theme, and appreciated the consistency of each theme answer being of the format "___ THE ___," and I liked that the words BITE, CHEW, and SWALLOW appeared in that order. It was a pleasant surprise to see a Zhouqin Burnikel puzzle today, as we usually see her byline on Sundays and Wednesdays. Thank you, Zhouqin, for this puzzle that was a great way to start my Monday.