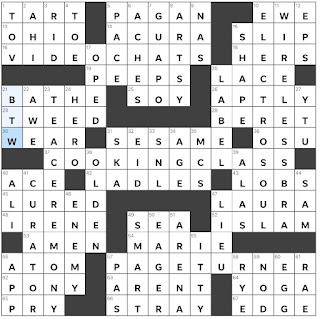 Theme Answers:
VIDEO CHATS (16A: Hangs out with a long-distance friend, say)
COOKING CLASS (37A: Lesson in the culinary arts)
PAGE TURNER (57A: Book that's hard to put down)
Theme synopsis: The opening word of each theme answer can follow the word HOME to form a new phrase. We have a HOME VIDEO, HOME COOKING, and HOME PAGE.
And now a word from our constructor:
Brooke: i had a lot of fun including the long down answers in this grid, and my favorite clues/references are 63a, 64a, 3d, 24d, 34d, and 60d :)
Things I learned:
Random thoughts and interesting things:

The first thing I noticed about this puzzle was the interesting grid shape. The puzzle is asymmetric by just one square to accommodate the 12-letter theme answer of COOKING CLASS. In addition to ELECTRO-SOUL, which I mentioned above, I also liked the other long downs of WIRELESS BRA (definitely a comfier option!) and TEA CEREMONY. Thank you, Brooke, for this puzzle that was a great way to start my Saturday.