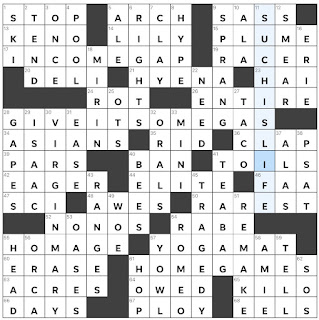 Theme Answers:
INCOME GAP (17A: Disparity in wealth distribution)
GIVE IT SOME GAS (28A: "Put the pedal to the metal!")
HOME GAMES (61A: The Mets play them at Citi Field)
Theme synopsis: Each of the 3 theme answers contain the word OMEGA.
Things I learned:
Random thoughts and interesting things:

This puzzle is here with your daily dose of OMEGA-3. VIRGIN MARY and SUCH IS LIFE are nice long bonus answers. Thank you, Zhouqin, for this puzzle that was a great way to begin my Wednesday.
Zhouqin Burnikel