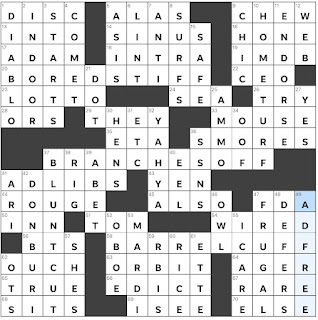 Theme Answers:
BORED STIFF (20A: Doodling during a lecture, for example)
BRANCHES OFF (37A: Continues onto a new path)
BARREL CUFF (58A: Dress shirt part with wrist buttons)
Theme synopsis: Each theme answer is surrounded by (AMONG) the letters BFF (Best FRIENDS Forever).
Things I learned:
Random thoughts and interesting things:

It's so nice to be AMONG FRIENDS! I enjoyed this fun theme. In addition to the answers I've highlighted above, I also liked HOME TURF, FRUGAL, and AD FREE. Also, congratulations to Anna Gundlach on her USA Today editorial debut today! Thank you, Enrique, for this puzzle that was a great solve following a day of hiking. Thanks, all for being patient for my blog post. Although I have been blogging about the USA Today crossword for over two years now, I still occasionally encounter new challenges, and today was one of those days when I couldn't access the puzzle this morning. I'm glad the tech issues got solved fairly quickly.

Here's what I posted this morning when I was unable to access the puzzle:

As you also may have encountered, there appears to be a glitch with the USA Today puzzle today. At the time I went to solve and blog about it, today's puzzle wasn't available either online or on the app. Hopefully this issue will get fixed, and when it does, I'll update this blog post. This will likely be later in the afternoon, as I am on vacation. I have been posting from the road the last few days, and am currently in Grand Teton National Park. Since I can't post about the puzzle at the moment, here are a couple of photos I took yesterday. Here's hoping for a quick fix of the puzzle!

This is my favorite photo I took yesterday. These are the Grand Tetons. The reflection of the mountains is seen in the Snake River just below a beaver dam that stretches across it.

This photo is taken at the same site, but is my attempt to be artsy by placing a thistle plant in the foreground.