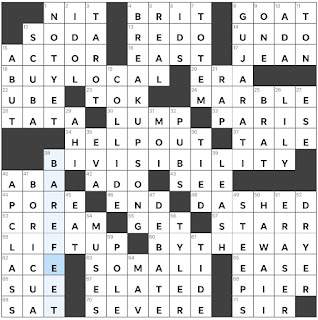 Theme Answers:
BUY LOCAL (18A: Support artisans from the area)
BI VISIBILITY (38A: Goal of an annual Sept. 23 observance)
BY THE WAY (60A: "Oh, meant to say...)
Theme synopsis: Each of the theme answers begins with a homophone of the word BYE, giving us a BYE BYE BYE trio.
And now a word from our constructor:
Brooke: neville's universal puzzle from june 13, 2021 now has an even more appropriate title -- you did hear it there first! an honor to cite prior art when it's by constructing great and kindest-person-around neville.
i'm really glad to get 38-across in a puzzle, especially today! and i really like my long "bonus" down answers in 4d, 8d, 19d, and 41d. i like the 4d+6d clue combinations and the 50d clue, and all the musical references!
Things I learned:
Random thoughts and interesting things:

I like all of this puzzle's theme answers, and appreciate the appropriateness of BI VISIBILITY appearing today. I appreciate Brooke giving a nod to Neville Fogarty's Universal puzzle with the same theme. It's not uncommon for constructors to come up with the same or similar themes. It's fun to note that although the theme is the same, these two puzzles have completely different sets of theme answers. Shoutout to the clue for BARE FEET (38D: What hula dancers have that clog dancers don't). I really enjoyed this clue (and I enjoy having BARE FEET whenever possible). Thank you, Brooke, for this puzzle that was a fabulous way to begin my Friday.
Brooke Husic