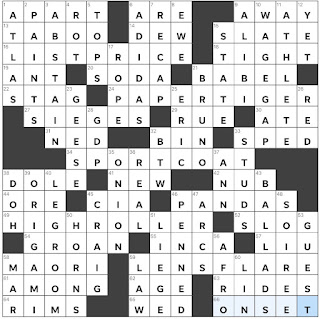 Theme Answers:
LIST PRICE (16A: Suggested retail cost)
PAPER TIGER (24A: Toothless adversary (or something that can be made in 39-Down)
SPORT COAT (34A: Business-casual jacket)
HIGH ROLLER (49A: Big spender at a casino)
LENS FLARE (59A: Photo effect caused by bright light)
Theme synopsis: The FIRST word of each theme answer can follow the word CONTACT, giving us CONTACT LIST, CONTACT PAPER, CONTACT SPORT, CONTACT HIGH, and CONTACT LENS.
Things I learned:
Random thoughts and interesting things:

I think of the "words that follow X" as a classic USA Today theme type, but it's actually been some time since we've seen such a theme. With five great theme answers, it feels like this puzzle is jam-packed with theme, and that was fun. In addition to the answers I've already highlighted, I enjoyed BALLADS, LEG ROOM, and WAGE GAP. This is Li Ding's USA Today crossword debut. Congratulations! Thank you, Li, for this puzzle that was a delightful start to my Monday.
Answer to Geography Quiz: The three U.S. STATEs whose names begin with the letter C are California, Colorado, and Connecticut.
Li Ding