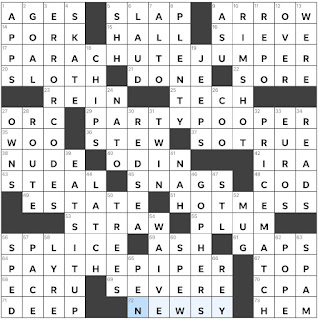 Thankfully, this puzzle was not at all painful, unlike an actual PAPER CUT! (Insert RIM SHOT here...) No need to be a PARTY POOPER, this is an enjoyable take on a classic theme type. Fun answers include EATS IT UP, SPLICE, SO TRUE, and PRICE MATCH. Thank you, Zhouqin, for this puzzle that was an excellent way to start my Sunday.
Zhouqin Burnikel