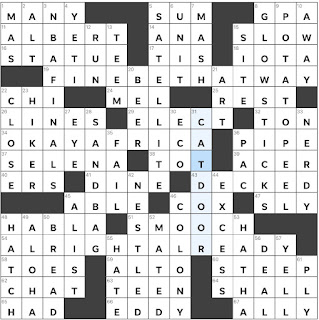 Theme Answers:
FINE BE THAT WAY (19A: "Do what you're gonna do, I guess")
OKAYAFRICA (34A: Digital media platform focused on the Black diaspora)
ALRIGHT ALREADY (54A: "That's enough!")
Theme synopsis: The START of each theme answer is a synonym for DECENT: FINE, OKAY, ALRIGHT.
Things I learned:
Random thoughts and interesting things:

Well, this puzzle was definitely a DECENT START to my day! I like synonym themes, especially when the theme answers are all lively and interesting as they are here. I could hear the attitude coming through loud and clear as I filled in "FINE BE THAT WAY," and "ALRIGHT ALREADY!" And I enjoyed learning about OKAYAFRICA. Thank you, Rafa, for this puzzle that was a not just DECENT, but a fabulous way to START my day.
Rafael Musa