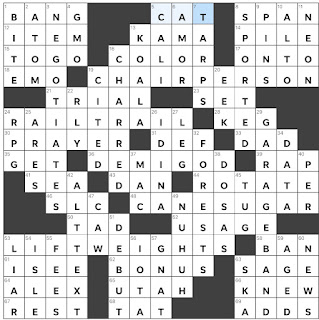 Theme Answers:
CHAIRPERSON (19A: Committee head)
RAIL TRAIL (24A: Rhyming name for a repurposed train track)
CANE SUGAR (48A: Sweetener in Mexican Coca-Cola)
LIFT WEIGHTS (53A: Use dumbbells or barbells)
Theme synopsis: The FIRST word of each theme answer is a type of mobility AID: CHAIR, RAIL, CANE, and LIFT.
And now a word from our constructor:
Bonnie: I'm a first-time constructor and very excited to share this puzzle. Many thanks to Brooke for showing me the ropes and to Erik for some great edits. I hope you enjoy!
Brooke: I had such a fun time time collaborating with Bonnie on this puzzle! I'm so honored to be a part of Bonnie's debut, and beyond excited to solve her upcoming and future puzzles!
Things I learned:
Random thoughts and interesting things:

It took me a bit to figure out the theme today, resulting in a nice "Aha!" moment when it clicked. In addition to answers I've already highlighted, I also enjoyed the entries GARAGE BAND, SPORTED, and DEMIGOD. Congratulations to Bonnie Eisenman on her DEBUT (51D: First performance) USA Today puzzle! Thank you, Bonnie and Brooke, for this puzzle that was a marvelous way to start my Monday.
Bonnie Eisenman Brooke Husic