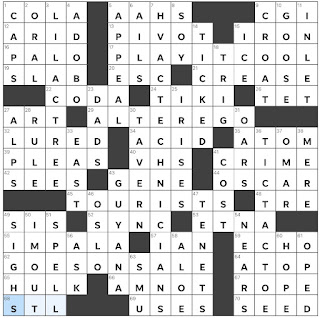 Theme Answers:
LILAC TREE (3D: Source of a wine that's "sweet and heady like my love," in a song)
HVAC TECHNICIANS (7D: Experts in indoor climate control systems)
TIC TAC TOE (36D: Game on a three-by-three grid)
Theme synopsis: Each theme answer contains the word ACT. As the theme answers are vertical, ACT is DROPping down the entries.
Things I learned:
Random thoughts and interesting things:

When I reviewed my solve, I was surprised there was only one "Thing I Learned" entry, as while I was solving the puzzle felt a bit more challenging than usual. However, my solving time wasn't any longer than usual, so given my interaction with the IMPALA clue, perhaps the reality is I just wasn't quite awake yet! At any rate, a classic theme type today. Some enjoyable non-theme answers: PLAY IT COOL, ALTER EGO, and TOURISTS. This grid is symmetrical. While that is not unusual (in fact, the majority of crosswords are symmetrical), I note it because most of Zhouqin Burnikel's recent USA Today puzzles have been asymmetrical. Thank you, Zhouqin, for this puzzle that was a great way to begin my Wednesday.