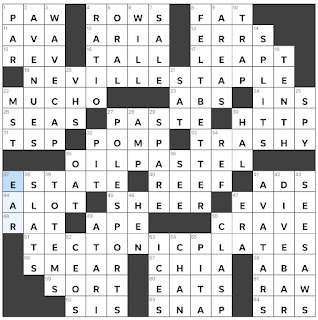 Theme Answers:
NEVILLE STAPLE (19A: Ska artist who wrote the autobiography "Original Rude Boy")
OIL PASTEL (35A: Drawing medium)
TECTONIC PLATES (51A: They can make mountains when they collide)
Theme synopsis: The last word of each theme answer is an anagram of the word PETALS: STAPLE, PASTEL, PLATES.
And now a word from our constructor:
Brooke: i've wanted to do an anagram puzzle for the USAT since Paolo's amazing Garden Variety puzzle and I'm happy i finally thought of one! i really enjoyed discovering/reading about/looking at congo's art.
Things I learned:
Random thoughts and interesting things:

I enjoy anagram themes, and this was a fun one, with a nice set of theme answers. Answers I liked that I haven't highlighted above: FELT BETTER, DIVE BAR, SEESAWS, and TOTEMS. Thank you, Brooke, for this puzzle that was a delightful way to begin my Monday.
Brooke Husic