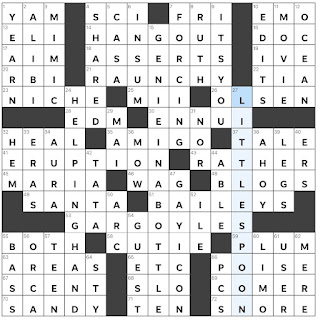 Theme Answers:
GENIE IN A BOTTLE (15D: Christina Aguilera song with the lyric "You gotta rub me the right way")
HELPING HAND (24D: Something lent in assistance)
LITTLE SPOON (27D: Inside cuddler)
Theme synopsis: The BOTTOM word of each vertical theme answer is something that can be used for FEEDing: BOTTLE, HAND, SPOON.
And now a word from our constructors:
Erica: So happy to collaborate with May on this one! Given the themer lengths, the grid was a challenge and I'm so happy with what we (well, mostly May) were able to do with it. Look out for other puzzles from me and May in the future, and find me on twitter @ewojcik! In honor of 19A, please watch this very satisfying scene from the 2017 Twin Peaks reboot: https://youtu.be/5nmmKkKoamc
May: Having admired USAT puzzles and Sally's blog from afar for a long time, I'm really stoked today to be contributing to both!! I looooved working with Erica (and Erik!) on this puzzle (they rock) and am a big fan of the theme words we chose, especially 27D, and the fun grid we devised. I hope solvers enjoy this puzzle and let us know what they think!
Things I learned:
Random thoughts and interesting things:

In addition to being my favorite of the theme answers, LITTLE SPOON was the first of those answers I discovered. This lead me to wonder whether a knife and fork were waiting for me, but HELPING HAND provided the "Aha!" moment to what direction the theme was heading. In addition to the theme, I liked HANG OUT, RAUNCHY, and GARGOYLES. This grid is asymmetric, but it is only three squares off from having mirror symmetry, being symmetrical around a vertical line down the center of the puzzle. Congratulations to May Huang, who is making her USA Today debut today! Thank you, Erica and May, for this puzzle that was a fabulous way to begin my Thursday.
Answer to the Geography Quiz: The Earth's five OCEAN's, listed from largest to smallest are: Pacific OCEAN, Atlantic OCEAN, Indian OCEAN, Southern OCEAN (aka Antarctic OCEAN), and the Arctic OCEAN.
Erica Hsiung Wojcik May Huang