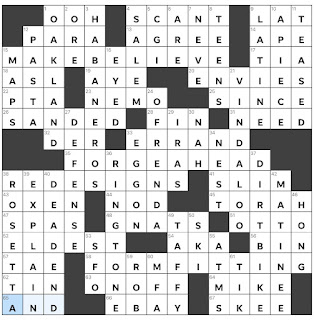 Theme Answers:
MAKE-BELIEVE (15A: Pretend)
FORGE AHEAD (35A: Proceed despite adversity)
FORM-FITTING (58A: Tight, like spandex)
Theme synopsis: The first (FORWARD) word of each theme answer is a synonym for FASHION: MAKE, FORGE, FORM.
And now a word from our constructors:
Emily, Kunal, and Brooke: We're so happy to have a triple collab in the USAT! We had such a great time gridding and cluing this together, and our favorite bonus answers are 1-Down, 3-Down, 21-Down, 24-Down, and 37-Down. Like many USA Today puzzles, the seed we tried to build this theme around ended up on the cutting room floor -- we're not telling you what it is, though, in case we can get it into a future puzzle!
Things I learned:
Random thoughts and interesting things:

Not one, not two, but three constructors worked together to FASHION, MAKE, FORGE, and FORM today's puzzle. A fun theme that took me a few moments to see, providing a nice "Aha!" moment when I discovered it. There's so much great stuff here. I feel like I wrote about a lot, and didn't even scratch the surface. Enjoyable answers in addition to those I highlighted: HABANEROS, LATINE, DEAD END, DIRT BIKE, and MATINEE. Thank you Emily, Kunal, and Brooke, for this puzzle that was a delightful way to begin my Thursday.
Brooke Husic Emily Sharp Kunal Nabar