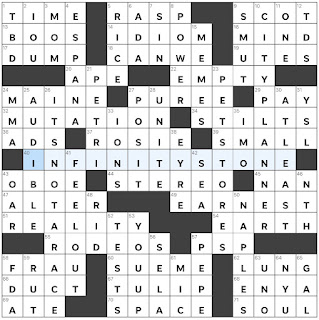 **Spoiler Alert!** Today's theme is related to the Marvel Cinematic Universe (MCU), specifically the movies in The INFINITY Saga. As such, Amanda's notes and my write-up may contain spoilers for these movies.
Theme Answers:
INFINITY STONE (40A: Any of six items sought by Thanos, represented in the starred answers)
TIME (1A: *"Hurry! We don't have much ___!")
MIND (16A: *"Do you ___?!")
REALITY (51A: *"Queer Eye" TV genre)
SPACE (70A: *"The final frontier")
SOUL (71A: *Heart and ___)
POWER (8D: *Telekinesis or invisibility, e.g.)
Theme synopsis: Having solved the puzzle, you have found the six INFINITY STONEs, and they may be placed in the GAUNTLET. (See Amanda's notes for further explanation.)
And now a word from our constructor:
Amanda: I really, really love Marvel and this puzzle is a love letter of sorts to one of my favorite films in the MCU (tune back in tomorrow -- the title of the Sunday puzzle is a direct reference to today's theme). For folks who aren't as into the Marvel stuff, I would love to take a moment to totally nerd out and explain today's theme. In "Avengers: Infinity War", Thanos (an alien warlord) is in search of the 6 Infinity stones, which are scattered throughout the universe -- each of which contains a specific power/ability. The 6 infinity stones are featured in this puzzle. An individual who wields all 6 is essentially all-powerful, and Thanos wishes to use them to randomly wipe out half of life in the universe in an effort to stabilize the effects of overpopulation. Because it's dangerous (or lethal!) to directly touch the Infinity stones, he has the Infinity Gauntlet (basically a glove that holds the stones) made for him. The stones essentially run, as in power, the gauntlet, hence the title of today's puzzle. Tune back in tomorrow for the inevitable conclusion to the Infinity Saga!
Things I learned:
Random thoughts and interesting things:

Today we are treated to the latest in Amanda Rafkin's series of superhero puzzles. (See GOTHAM'S VILLAINS ARE GOING DOWN and COLORFUL CHARACTERS.) Although I am not an MCU superfan, I do enjoy the stories, and am aware of most of the characters and movies. As such, I appreciated Amanda's background information provided in her notes. In addition to the theme and Easter Eggs, there are a lot of other fantastic answers in this puzzle: IT'S NOT A RACE, YOU UP, CITY PLANNER, FEEL OUT, and AUDIBLE, for example. I'm already looking forward to Amanda's puzzle tomorrow! Thank you, Amanda, for this puzzle that was a terrific way to begin my Saturday.
Amanda Rafkin